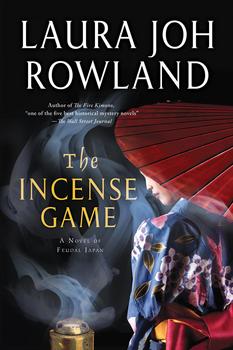 The Incense Game: A Novel of Feudal Japan

In the wake of a terrifying earthquake, Sano Ichirō races to solve a crime that could bring down the shogun's regime
Japan, 1703. A devastating earthquake has left the city of Edo in shambles—even the shogun's carefully regulated court is teetering on the brink of chaos. This is no time for a murder investigation. But when Sano discovers the bodies of two young sisters buried beneath the rubble, he suspects that incense poisoning, not the earthquake, killed them. Worse yet, their father, a powerful nobleman, threatens to topple the vulnerable regime unless Sano agrees to track down his daughters’ killer.

With the help of his wife, Reiko, and his chief retainer, Hirata, Sano begins a secret investigation that jeopardizes his whole family. And with Hirata mysteriously neglecting his duties and an old foe plotting to overthrow Sano and the shogun himself, the shockwaves from the earthquake are only the beginning.

Previous Titles
The Ronin's Mistress 9781250015235, The Fire Kimono 9780312588861
Author
<p>LAURA JOH ROWLAND is the author of fifteen previous Sano Ichirō mysteries. "The Fire Kimono "was named one of the "Wall Street Journal'"s""Five Best Historical Mystery Novels; and "The Snow Empress "and "The Cloud Pavilion" were among "Publishers Weekly"'s""Best Mysteries of the Year." "She lived through a natural disaster when Hurricane Katrina nearly destroyed her house in New Orleans, and now lives in New York City.
Selling Points

In Laura Joh Rowland's most powerful and evocative thriller yet, Sano and his wife strive to solve the case in a world that is crumbling around them.