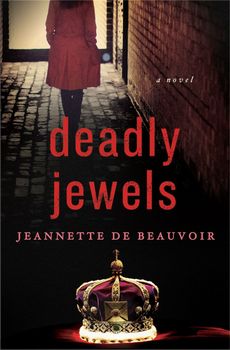 When Martine LeDuc, the dedicated publicity director for the city of Montreal, is summoned into the mayor's office, she immediately runs through all the things that could have gone wrong in the press that day, but for once she's pleasantly surprised. The mayor has good news: the city is due for a PR coup. A doctoral researcher at McGill University has been part of some excavations under the city and has found positive proof that the British crown jewels were indeed, as the rumor goes, stored in Montreal underground during WWII, and then subsequently returned to London.

Martine is thrilled to be part of the excavation project, until it turns out that one of the dig's discoveries includes the remains of a man who has two small jewels resting where his stomach once was, and a bullet hole in the back of his skull. With a scandal of this magnitude Martine knows it's only a matter of time before the news gets out in a way that won't boost good PR for Montreal... or her job.

She decides to team up with an academic friend to figure out what happened with this decades old theft, before the world finds out that two of London's prize jewels are fake, and before the nefarious circumstances that got them there get to Martine first and silence her for good.

The chilling and suspenseful follow-up to Asylum, set in contemporary Montreal.