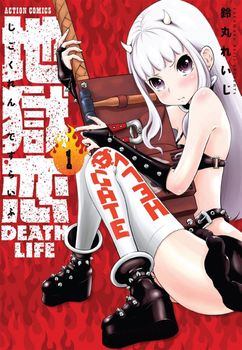 Love in Hell: Death Life is a sequel to the manga series, Love in Hell, a hilarious and sexy romp through the afterlife. Featuring a new hapless hero and a whole new cast of characters, alongside familiar faces from the previous storyline, Love In Hell: Death Life may be read and enjoyed independently of the first series.

For fans of naughty, supernatural comedies like Monster Musume, Love in Hell: Death Life is sure to entertain!

Utsunomiya Sousuke is dead. But his new life is about to begin...in Hell! Upon awakening in the Afterlife, Sousuke meets his painfully sexy devil guide Sanagi, who may be short of stature, but packs an all-powerful punch. Like Rintaro before him, can the hopelessly irreverent Sousuke repent from his sins, or is he fated to be forever tortured and teased by a gorgeous demonic temptress?

The devilishly funny companion series to the acclaimed manga, Love in Hell!