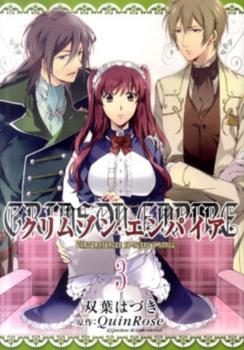 Featuring a strong heroine who is a deadly assassin yet awkward when dealing with the many male suitors who surround her, Crimson Empire: Circumstances to Serve a Noble combines romance, fantasy, and swashbuckling adventure. Each volume contains impressive shoujo-style artwork and colour pinups.

From the time she was sold into servitude as a young girl and told by a handsome demonic figure that she had a destiny to fulfil, Sheila’s childhood was anything but easy. After joining an assassins’ guild to undergo rigorous training, Sheila is later taken in by the dashing Prince Edvard to serve as both his housemaid and bodyguard.

As skilful as she is with a blade, Sheila hasn’t a clue when it comes to courtly romance. While she uses her talents to help Edvard win the throne, can she stave off the many admirers who vie for her heart?

Crimson Empire: Circumstances to Serve a Noble is a shoujo manga series by QuinRose, the creator of Alice in the Country of Clover. Simultaneous to the release of Crimson Empire Volume 3, Seven Seas will release the newest instalment in the Alice series— Alice Love Fables: Toy Box—which includes a 30-page, never before published Crimson Empire story.