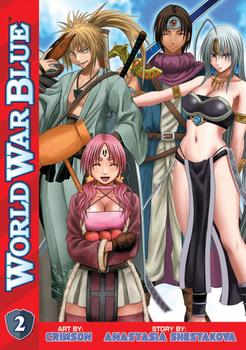 Description
World War Blue is a nine-volume manga series drawn in the tradition of popular shonen manga like Fairy Tail and Rave Master. Each book includes a large array of extra content, such as colour maps and pin-ups, detailed character bios, and fun bonus features that delve into video game history and lore. World War Blue has been adapted into an ongoing anime which currently airs on Japanese TV and is simulcast in English on Crunchyroll.

In the continent of Consume, an endless war rages between bitter rivals: the Segua Kingdom vs. the Ninteldo Empire. Upon his dinosaur steed, the stern Emperor Marcus has led the Ninteldo Empire to near-victory. Now, with the majority of Consume under its control, Ninteldo has Segua up against the ropes.

Enter a fleet-footed lad named Gear, who seeks vengeance against Ninteldo for his brother’s death. After joining Segua’s Army, Gear is enlisted in the Special Forces, due to his amazing speed. Yet the inexperienced, hasty youth may not be ready for the realities of war—or he might just become the Segua Empire’s last and greatest hope.
Previous Titles
9781937867966 World War Blue vol 1
Selling Points
World War Blue is an all-new fantasy manga series inspired by the “console wars”, the historic struggle for market share between manufacturers in the video game industry. In World War Blue, this conflict is represented by satirical versions of famous video game characters, who fight each other in a sprawling RPG-like world.