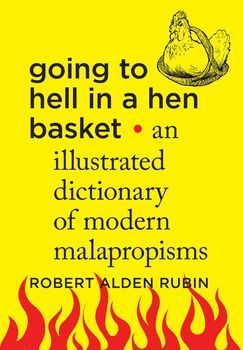 Going to Hell in a Hen Basket: An Illustrated Dictionary of Modern Malapropisms

Everyone has made the mistake of using a word or phrase that they think sounds sort of right, but isn't. Rubin collects his favourite malapropisms in a gift book that's perfect for bookworms and wordsmiths. Some examples include: -"without further adieu" - Conflation of bidding adieu (saying good-bye) with ado (complicated doings, ceremony) to mean "without saying anything more." -"hair-brained" - Perhaps confuses hare-brained with airheaded. Hare-brained (rash, silly, or stupid) derives from the erratic mating dances of hares, as in the saying "mad as a March hare," though it also follows that someone with hair for brains wouldn't be sharp. -"I was curled up in a feeble position" - Confusing feeble with fetal, but actually makes a bit of sense! -"exercising demons" - I guess even demons need to go to the gym. Found on blogs, the deepest corners of the internet, as well as some of the most esteemed publications, Rubin gently pokes fun at the twists and turns writers put our language through.

Delighting in the creative misuse of words and celebrating the verbal flubs that ignore the conventions of standard English, Robert Alden Rubin provides an illustrated dictionary of contemporary malapropisms.