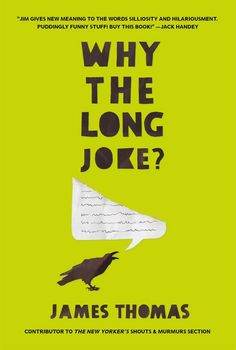 Why the Long Joke?

This is a very silly book. There are lots of jokes (I mean it; there are hundreds). Also: dozens of stories, poems, diagrams, lists, and cartoons. If you like laughing, oh boy, watch out, because of the aforementioned jokes. Except they're not really jokes. They're more like entries in a contest for the Stupidest Sentence Ever Written.

James Thomas decided a few years ago that he wanted to write comedy for the rest of his life. Write for comedy films. Write stand-up. Write humor books. Write funny T-shirt slogans. Write comic strips. Write absurd text adventure games. Write tweets. Write gags for the undersides of rocks. So he declared himself the President of Twitter and enjoyed his new-found glory sitting hunched over a rock with a crayon, putting the finishing touches on this very silly book.

Inside you'll find nuggets of comedy gold, including "How to Write a Sentence"; "Edgar Allan Poe Goes to a Music Festival"; and "Eleven Drafts of an Opening Paragraph." You'll also find Silver and Bronze winners of yet-to-be-determined microcomedy awards that you have to read to remember. And you can't miss the astonishing original illustrations of Dinosaurs of the Future (they're very big).

A hilarious debut collection of charmingly absurd vignettes, lists, drawings, and one-liners by a peculiar new voice in the comedy world.