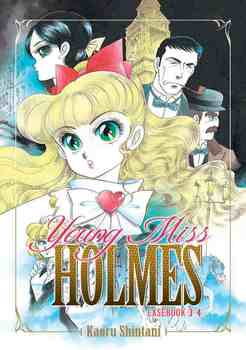 Christie Holmes is a prodigy. At ten years old, she’s as familiar with the sciences and classics as any older student at Cambridge or Oxford. And her facility with logic is reminiscent of her uncle, the eminent Sherlock Holmes himself. So, what’s a brilliant young girl to do when her parents are away in India, leaving her behind in the care of maids and servants? Solve mysteries, of course.

Along with her giant hound Nelson, Christie’s implacable curiosity leads her from one dangerous adventure to another, often joining forces with Uncle Sherlock and Doctor Watson on their famed investigations. Christie may look pint-sized, but her clever mind is never to be underestimated!

Kaoru Shintani is an award-winning Japanese manga artist/author whose best-known works include "Area-88 "and "Cleopatra DC."

384-page manga of classic Sherlock Holmes tales from the POV of his precocious niece!