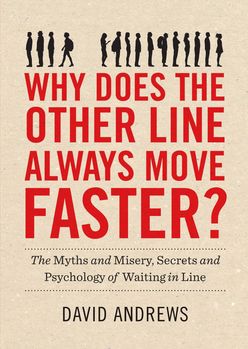 Why Does the Other Line Always Move Faster?: The Myths and Misery, Secrets and Psychology of Waiting in Line

Now it’s the subject of the kind of smart, quirky, compelling nonfiction treatment that has made Malcolm Gladwell and Why Do Men Have Nipples? international bestsellers. And the perfect cocktail party conversation starter: Did you know that the first lesson of boot camp is to teach recruits how to stand rigidly in line? That in Disneyland, the global centre of line-waiting, queuing is managed from a bunker under Sleeping Beauty Castle? Or that queuing is so ingrained in British culture, thugs rioting in London were observed taking their turns when looting a shop? Or that in 2007, the People’s Republic of China began a series of National Voluntarily Wait-in-Line Days, in hopes that they could train their non-queuing populace to be more like Westerners before the 2008 Olympics arrived? Or that even though McDonald’s and Burger King have faster counter service, surveyed customers are more satisfied waiting at Wendy’s because the queue barriers assure that the first-come will be first-served?

And that gets to the heart of this fascinating, witty book. Citing sources ranging from Harvard Business School professors to Seinfeld, dipping back to the first queue during the French Revolution to the state-of-the-art study of line management, it comes back to one underlying truth: It’s not about the time you spend waiting, but how the circumstances of the wait affect your perception of time. In other words, the other line always moves faster because you’re not in it.

How we wait, why we wait, what we wait for - waiting in line is a daily indignity that we all experience, usually with a little anxiety thrown in (Why is it that the other line always moves faster?!?).