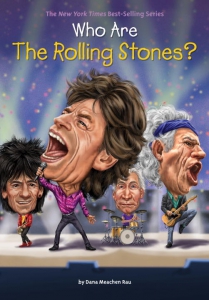 Who Are the Rolling Stones?

Description
Starting out over fifty years ago, the Rolling Stones took the music of the blues and blended it into rock and roll to create their own unique sound. Decades later, they are still hard at work, recording and playing live to massive crowds of adoring fans. Who Are the Rolling Stones? captures the excitement of the Stones on their journey to become the greatest rock-and-roll band in the world. Series Overview: The New York Times Best-Selling series of illustrated biographies for young readers includes artists, athletes, scientists, and world leaders.
Previous Titles
WHO WAS GANDHI ISBN 9780448482354 AND WHO WAS MARIE ANTOINETTE ISBN 9780448483108
Selling Points
Follow the bad boys of rock and roll from their beginnings in London to their unparalleled success around the world.
« Back