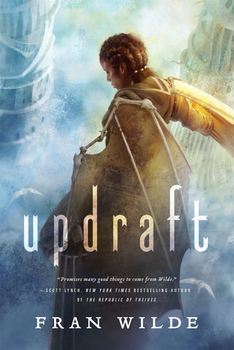 Welcome to a world of wind and bone, songs and silence, betrayal and courage. Kirit Densira cannot wait to pass her wing test and begin flying as a trader by her mother's side, being in service to her beloved home tower and exploring the skies beyond. When Kirit inadvertently breaks Tower Law, she attempts to save her family from greater censure by giving up her dreams as a sacrifice to the secretive governing body of the Towers.

Kirit throws herself instead into the dangerous training at the Spire, the tallest, most forbidding tower, deep at the heart of the City.

As she grows in knowledge and power, she starts to uncover the depths of Spire secrets. Kirit begins to doubt her world and its unassailable Laws, setting in motion a chain of events that will lead to a haunting choice, and may well change the City forever - if it isn't destroyed outright.

The Nebula Awards were awarded on Saturday, May 14, 2016 in Chicago by the Science Fiction and Fantasy Writers of America.

More info about the awards and SFWA can be found here: http://www.sfwa.org/nebula-awards/