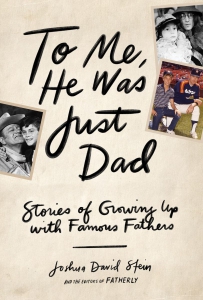 To Me, He Was Just Dad: Stories of Growing Up with Famous Fathers

Description
My Father the Chef. My Father the Cult Leader. My Father the Duke. These men (Jacques Pépin, Saul Newton, and John Wayne, respectively) are among the famous - and infamous - fathers featured in To Me, He Was Just Dad, a collection of first-person essays written by the children of some of the world’s most fascinating men. Though these men may be familiar to the reader, their children offer a unique, intimate view of them at their most unvarnished, through heartfelt reflections, charming anecdotes, and archival photographs. Christopher Reeve’s son fondly recalls both the adventure-filled days spent copiloting Cessnas with his Superman father, and the ways in which their relationship deepened after Reeve’s devastating accident. Evel Knievel’s son, Robbie Knievel, reveals the mixture of fear and pride his father had in his son’s desire to follow in his footsteps, beginning with jumping his mini-bike over his friends’ ten-speeds to eventually succeeding where his father had failed, jumping the Caesars Palace fountains in Las Vegas. And Cesar Chavez’s son shares the most important lesson his father ever taught him: “In the fight for justice, you only lose when you stop fighting - you only lose when you quit.” Taken together, these and the many other stories featured here serve as a moving celebration of the profound role fathers can play in the lives of their children.
Selling Points
An intimate look at the family lives of notable and notorious fathers, with first-person essays from their children that pay tribute to the complex, profound relationships between kids and their dads.
« Back