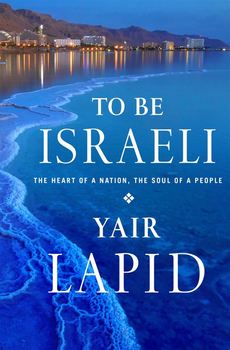 To Be Israeli: The Heart of a Nation, the Soul of a People

In To Be Israeli, Yair Lapid offers his unique perspective on his equally unique homeland: its war-torn but inspiring history, prickly but warmhearted people, imperfect but spirited democracy. In a collection of insightful, poignant, and often humorous essays, Lapid takes on the topics that have shaped his country: the conflict with the Palestinians, anti-Semitism, terrorism, and the legacy of the Holocaust.

A popular newspaper columnist and TV host before he entered politics, Lapid for the first time shares with American readers the tough-minded but hopeful vision that won over so many voters, bringing a calm, levelheaded voice to topics usually dominated by vitriol and denunciation. A fervent secularist who attends synagogue, Lapid addresses hot-button issues such as the role of religion in Israeli society. A devoted father with a passion for history, Lapid also reflects on the personal and family milestones that reflect Israel’s differences from other countries, such as watching his oldest son join the army and seeing four generations attend the same Passover seder.

Lapid assesses his country’s greatest accomplishments and most horrific failures, its miraculous survival and the gathering threats it faces, the burdens of the past and reasons to think a bright future lies ahead.

From bestselling Hebrew author Yair Lapid, To Be Israeli is a fresh, fascinating, and illuminating look at modern Israel from one of the country's leading political figures.