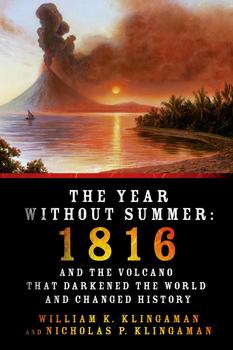 The Year Without Summer: 1816 and the Volcano That Darkened the World and Changed History

As a result of a volcanic eruption in 1815 in Indonesia, weather patterns were disrupted worldwide for months, producing excessive rain, frost, and snowfall across much of the North eastern U.S., Canada, and Europe in the summer of 1816. In the U.S., the extraordinary weather produced food shortages, religious revivals, and extensive migration from New England to the Midwest. In Europe, the cold and wet summer led to famine, food riots, and one of the worst typhus epidemics in history. The change in climate deposed rulers, shattered social configurations, and sowed fear in people’s minds. It is also likely to have been responsible for the creation of Mary Shelley’s Frankenstein and J.M.W. Turner’s fiery sunset paintings. Making use of a wealth of source material and employing a compelling narrative approach, The Year Without Summer examines not only the climate change engendered by the eruption, but also its effects on politics, the economy, the arts, and social structures. It is populated by royal, political, literary, and everyday characters, and the authors skilfully draw the connections between the extraordinary weather and its effects on life everywhere.

In the tradition of Krakatoa, The World Without Us, and Guns, Germs and Steel comes a sweeping history of the year that became known as eighteen-hundred-and-froze-to-death