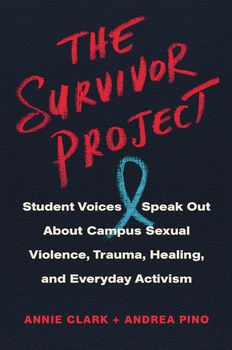 The Survivor Project: A Collection of Campus Rape Survivor Stories

In 2012, Annie Clark and Andrea Pino, then 23 and 20, and both survivors of campus rapes devised a legal argument that would, for the first time, hold universities accountable for mishandling student reports of sexual assault. They reframed Title IX, the 1972 law that bars gender based discrimination in schools, and leaned on the Clery Act, which requires colleges with federal financial aid programs to disclose information about crime on their campuses. The first federal complaint they filed was against UNC Chapel Hill, their alma mater. Bingo. The U.S. government opened an investigation.

Since then, Clark and Pino have helped hundreds of students file complaints. Over 100 schools are currently under federal investigation, including Harvard, Amherst, Swarthmore, Vanderbilt, and more. Clark's and Pino's efforts have ignited a revolutionary movement of unprecedented efficiency, turning a nation's eyes to the disturbing truth that campus rape is far from an aberration and that schools have harvested golden reputations and financial gain from a landscape of pervasive gender inequity and neglect of student safety. Clark and Pino have galvanised thousands of survivors, activists, and supporters toward a united purpose, to end sexual violence on college campuses.

The powerful, diverse survivor stories gathered here will bring support to isolated victims and provide inspiration and a safeguard of awareness for students everywhere.

A paradigm-shifting collection of true stories from survivors of campus sexual assault, presented by the two young activists at the forefront of the effective, new national anti-rape movement.