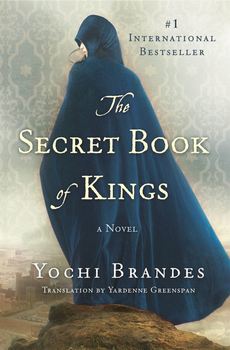 The Secret Book of Kings

The untold story of Jerobaam, fourth king of Israel, and Michal, King David's discarded Queen, by bestselling Israeli author Yochi Brandes. Stories are deadlier than swords. Swords kill only those who stand before them; stories decide who will live and die in generations to come. Shlom'am, a young man from the tribe of Ephraim, has grown up in the shadow of several secrets. He wonders why his father is deathly afraid of the King's soldiers, and why his mother has lied to him about the identities of those closest to him. Knowing his parents won't divulge more than they have to, Shlom'am sets out on his own to unearth his mysterious past. At the height of his journey, Shlom'am encounters the Crazed Princess. Princess Michal, daughter of the ill-fated King Saul and discarded wife of the illustrious, dangerous King David, seems doomed by the annals of history: hellbent on seizing the throne, David wiped out her father's line and left her isolated...and plotting. Only Michal knows the shocking circumstances of Shlom'am's birth. Only she can set into motion his destiny to become Jerobaam, the fourth king of Israel.

The Secret Book of Kings is a sweeping biblical epic filled with court intrigue, romance, and rebellion. It engages with the canonized stories of the Israel's foundation and turns them on their heads. Brandes, known for her profound familiarity with Jewish sources, uncovers vibrant, adversarial men and woman buried deep in the scriptures and asks the loaded question: to what extent can we really know our past when history is written by the victors?