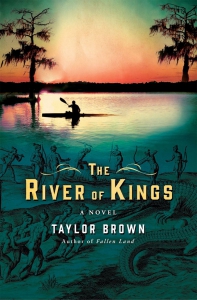 The River of Kings: A Novel

The Altamaha River, Georgia’s “Little Amazon,” has been named one of the 75 “Last Great Places in the World.” Crossed by roads only five times in its 137-mile length, the blackwater river is home to thousand-year-old virgin cypress, descendants of 18th-century Highland warriors, and a motley cast of rare and endangered species. The Altamaha has even been rumoured to harbor its own river monster, as well as traces of the most ancient European fort in North America.

Brothers Hunter and Lawton Loggins set off to kayak the river, bearing their father’s ashes toward the sea. Hunter is a college student, Lawton a Navy SEAL on leave; both young men were raised by an angry, enigmatic shrimper who loved the river, and whose death remains a mystery that his sons hope to resolve. As the brothers proceed downriver, their story is interwoven with that of Jacques Le Moyne, an artist who accompanied the 1564 expedition to found a French settlement at the river’s mouth, which began as a search for riches and ended in a bloody confrontation with Spanish conquistadors and native tribes, leaving the fort in ruins and a few survivors fleeing for their lives. In The River of Kings, SIBA-bestselling author Taylor Brown artfully weaves three narrative strands - the brothers’ journey, their father’s past, and the dramatic history of the river’s earliest people - to evoke a legendary place and its powerful hold on the human imagination.

Two brothers travel a storied river’s past and present in search of the truth about their father’s death in the second novel by the acclaimed author of Fallen Land.