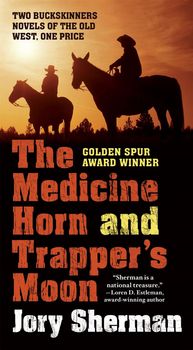 The Medicine Horn and Trapper's Moon

From the frontier South to the brawling, bawdy streets of still-French St. Louis, to the awesome grandeur of the high plains, Lem Hawke was the greatest of the Big Sky Mountain Men. He lived hard, loved hard, and when he fought, it was war to the knife. The Medicine Horn is the story of his life, loves, and violent wars--an epic tale of the Old West as big as the frontier and as rugged as the men and women who made it their own.

As farmers, Lemuel Hawke and his fifteen-year-old son, Morgan, are used to hard work and a hard life. But nothing prepared them for the dangers of the trail they follow west, heading for the rich fur-trapping grounds of the Rocky Mountains.

Storms, floods, and deadly cold threaten the Hawkes, and Nature's fury is not the only peril father and son must face. As they follow the trail, others follow them: an unscrupulous fur trader out to claim other men's wealth as his own; a man bent on avenging his murdered brother; a woman scorned. Luckily, Lem and Morgan have allies: a band of trappers and mountain men whose gruff exteriors mask fierce loyalty and hard-won wisdom... and the Indians who see in young Morgan a powerful strength of spirit.