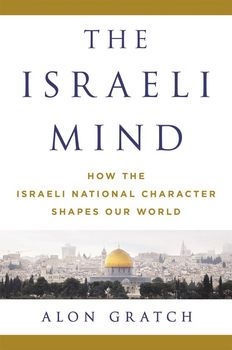 The Israeli Mind: How the Israeli National Character Shapes Our World

Drawing on a broad cultural and historical canvas, and weaving in the author's personal and professional experience, The Israeli Mind presents a compelling, if disturbing, portrait of the Israeli national character. Emerging from the depth of Jewish history and the drama of the Zionist rebellion against it, Israelis are struggling to forge an identity. They are grand and grandiose, visionary and delusional, generous and self-centered. Deeply caring because of the history of Jewish victimization, they also demonstrate a shocking indifference to the sufferings of others. Saying no is their first, second and third line of defense, even as they are totally capable of complete and sudden capitulation. They are willing to sacrifice themselves for the collective but also to sacrifice that very collective for a higher, and likely unattainable ideal.

Dr. Alon Gratch draws a vivid, provocative portrait of the conflicts embedded in the Israeli mind. Annihilation anxiety, narcissism, a failure to fully process the Holocaust, hyper-masculinity, post-traumatic stress, and an often unexamined narrative of self-sacrifice, all clash with the nation's aspiration for normalcy or even greatness. Failure to resolve these conflicts, Gratch argues, will threaten Israel's very existence and the stability of the Western world.

An Israeli-American psychologist examines his native nation's state of mind and its disproportional impact on the Middle East and the global community.