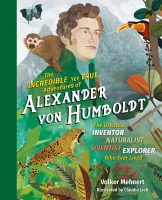 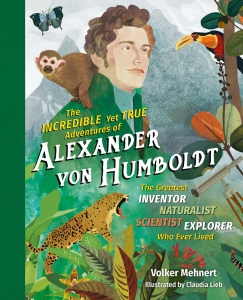 The Incredible yet True Adventures of Alexander von Humboldt: The Greatest Inventor-Naturalist-Scientist-Explorer Who Ever Lived

Description
This beautifully illustrated biography of a pivotal early scientist will captivate the inner adventurer in children and adults alike Explorer. Scientist. Polymath. Hero. In his day, Alexander von Humboldt (1769–1859) was among the most renowned scholars of the Enlightenment. He led pioneering expeditions in Central and South America (including the Amazon rainforest) as well as in Siberia, and he arguably founded the natural sciences as we know them. Charles Darwin called Humboldt “the greatest scientific traveler who ever lived,” and credited him with inspiring the journey that resulted in On the Origin of Species. And yet, in history books, Humboldt has been eclipsed by his intellectual heirs and admirers - such as Darwin himself, John Muir, and Henry David Thoreau - until now. This captivating, richly illustrated narrative biography for kids will whisk away readers young and old, and inspire them to see the world through the eyes of one of the greatest early scientists.
Selling Points
An immersive and beautifully illustrated narrative biography about the German explorer and early scientist Alexander von Humboldt, whose journeys throughout the world yielded countless discoveries and earned him the admiration of Charles Darwin (and many others). For kids ages 8-12.
« Back