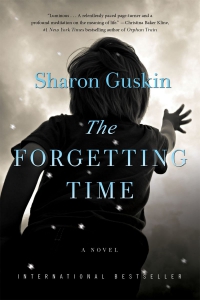 The Forgetting Time: A Novel

Single mom Janie is trying to figure out what is going on with her beloved son Noah. Noah has never been ordinary, but his eccentricities are starting to become worrisome. One afternoon, Noah’s preschool teacher calls: Noah has been talking about being held under water until he can’t breathe. The school orders a psychiatric evaluation. And life as Janie knows it stops.

For Jerome Anderson, life as he knows it has already stopped. Diagnosed with aphasia, his first thought as he approaches the end of his life is, I’m not finished yet. Once an academic star, he threw everything away to pursue an obsession: the stories of children who remembered past lives. He became a laughing stock but never stopped believing that there was something beyond what anyone could see or comprehend. He spent his life searching for a case that would finally prove it. And with Noah, he thinks he may have found it.

Soon, Noah, Janie, and Anderson will find themselves knocking on the door of a mother whose son has been missing for eight years. When that door opens, all of their questions might be answered.

Gorgeously written and fearlessly provocative, Sharon Guskin’s debut explores the profound connection between a child and parent. It examines what we regret in the end of our lives and hope for in the beginning, and everything in between.

What would you do if your child claimed he had lived another life? That he wants his other mother? A riveting mystery about the lengths we will go for our children.