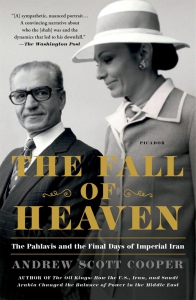 The Fall of Heaven: The Pahlavis and the Final Days of Imperial Iran

Description
In this remarkably human portrait of Mohammad Reza Pahlavi, the last Emperor of Iran, Andrew Scott Cooper examines the life of an infamously complex personality in a bold new light. The recent wave of instability in the Middle East has led Iranians and scholars to reassess the legacy of the Shah—widely denounced as a brutal, corrupt dictator—who championed Western-style reforms and launched Iran onto the world stage as a modern and powerful state. The Fall of Heaven was written with exclusive access to royalists and revolutionaries—most notably the Shah’s widow Empress Farah, other members of the Pahlavi family, and the men who deposed them: Iran’s first elected president Abolhassan Banisadr, along with other religious and political figures active in the revolutionary underground. These testimonials are set alongside first-person remembrances of White House officials, along with American diplomats and civilians in Tehran. Cooper takes readers from the Shah’s lavish palace in Tehran to the dusty streets of Najaf, where Ayatollah Khomeini lived in exile, and from the Imperial Family’s summer retreat on the Caspian Sea to the back alleys of Beirut, where Islamist revolutionaries plotted the regime’s overthrow. Both epic and intimate, The Fall of Heaven re-creates the dramatic final days of a legendary ruling family, the deposition of which started the militant unrest that still affects the Middle East today.
Previous Titles
9780805098976 The Fall of Heaven (Hardback)
Selling Points
A gripping account of the rise and fall of Iran's glamorous Pahlavi dynasty, written with the cooperation of the late Shah's widow, Empress Farah
« Back