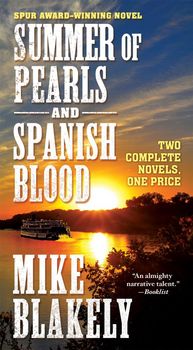 Summer of Pearls and Spanish Blood

The coming of the railroad nearly spelled the end of the riverboat community of Port Caddo until the Great Caddo Lake Pearl Rush of 1874. Ben Crowell remembers it well: that summer, he fell in love. That autumn, Judd Kelso, a local riverboat owner, was killed. The pearl rush was over within a few months, but Judd Kelso's murder remained unsolved, and only Ben Crowell seemed interested in finding out who killed Kelso and why.

In 1870, Bart Young heads for the New Mexico Territory, where he has heard men are making fortunes overnight in land speculation on the old Spanish grants. He expects to be rich before the year is out. But the ranchers are stubborn, the local officials are corrupt, and Bart isn't the first hopeful to arrive. His dream seems a lost cause . . . until he stumbles onto evidence of a lost grant bigger than he could have ever imagined: the entire Sacramento Mountain Range.