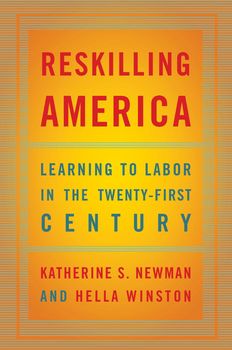 Reskilling America: Learning to Labor in the Twenty-first Century

After decades of off-shoring and downsizing that have left blue collar workers obsolete and stranded, the United States is now on the verge of an industrial renaissance. But there isn't a labour pool skilled enough to fill the positions that will be created, which are in many cases technically demanding and require specialised skills. A decades-long series of idealistic educational policies with the expressed goal of getting every student to go to college has left a generation of potential workers out of the system. Touted as a progressive, egalitarian institution providing opportunity even to those with the greatest need, the American secondary school system has in fact deepened existing inequalities.

We can do better, argue acclaimed sociologists Katherine Newman and Hella Winston. Taking a page from the successful experience of countries like Germany and Austria, where youth unemployment is a mere 7%, they call for a radical reevaluation of the idea of vocational training, long discredited as an instrument of tracking. The United States can prepare a new, high-performance labour force if it revamps their school system to value industry apprenticeship and rigorous technical education. By doing so, we will not only be able to meet the growing demand for skilled employees in dozens of sectors where employers decry the absence of well trained workers - we will make the American Dream accessible to all.

From Katherine Newman, award winning author of No Shame in My Game, and sociologist Hella Winston, a sharp and irrefutable call to reenergise America's long-neglected system of vocational training.