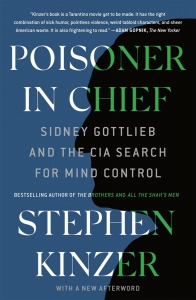 Poisoner in Chief: Sidney Gottlieb and the CIA Search for Mind Control

Description
The visionary chemist Sidney Gottlieb was the CIA’s master magician and gentle hearted torturer - the agency’s “poisoner in chief.” As head of the MK-ULTRA mind control project, he directed brutal experiments at secret prisons on three continents. He made pills, powders, and potions that could kill or maim without a trace, and he secretly dosed unsuspecting American citizens with mind-altering drugs. His experiments spread LSD across the United States, making him a hidden godfather of the 1960s counterculture, and he was also the chief supplier of spy tools used by CIA officers around the world. Stephen Kinzer, the author of groundbreaking books about U.S. clandestine operations, draws on new documentary research and original interviews to bring to life one of the most powerful unknown Americans of the twentieth century. And in a new afterword, he brings to light newly revealed stories about Gottlieb’s astonishing career at the intersection of extreme science and covert action.
Previous Titles
The True Flag 9781250159687 (PB), The Brothers 9781250053121 (PB) and Poisoner in Chief 9781250140432 (HB)
Selling Points
The bestselling author of All the Shah’s Men and The Brothers tells the astonishing story of the man who oversaw the CIA’s secret drug and mind-control experiments of the 1950s and 60s.
« Back