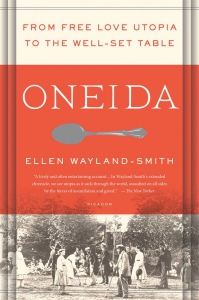 Oneida: From Free Love Utopia to the Well-Set Table

Description
Amidst the religious fervor of the Second Great Awakening, John Humphrey Noyes, a spirited but socially awkward young man, attracted a group of devoted followers with his fiery sermons about creating Jesus’ millennial kingdom here on earth. Noyes and his followers built a large communal house in rural New York where they engaged in what Noyes called “complex marriage,” an elaborate system of free love where sexual relations with multiple partners was encouraged. Noyes was eventually inspired to institute a program of eugenics, known as 'stirpiculture,' to breed a new generation of Oneidans from the best members of the Community—many fathered by him. When Noyes died in 1886, the Community disavowed Noyes’ disreputable sexual theories and embraced their thriving business of flatware. Oneida Community, Limited would go on to become one of the nation’s leading manufacturers of silverware, and their brand a coveted mark of middle-class respectability in pre- and post-WWII America. Told by a descendant of one of the Community’s original families, Oneida is a captivating story that straddles two centuries to reveal how a radical, free-love sect, turning its back on its own ideals, transformed into a purveyor of the white picket fence American dream.
Previous Titles
Oneida 9781250043085 (Hardback)
Selling Points
'Fans of Joseph Ellis and David McCullough will appreciate this engrossing entry' (Library Journal, starred review) into a radical religious community, now a symbol of middle-class respectability
« Back