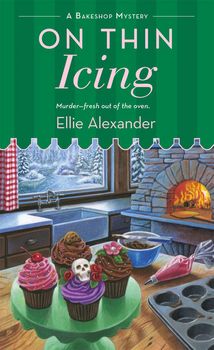 It's January in Ashland, Oregon. Things are quiet in the cold, sleepy town, and Jules is thrilled when she's hired to cater a retreat at the nearby Lake of the Woods Resort. She packs up her baking supplies and maneuvers the twisting, treacherous roads to the high alpine lake. Jules and her assistant Sterling quickly familiarise themselves with the rustic lodge and its equally rustic kitchen. But just as they find their rhythm in the kitchen and the guests arrive, so does someone from Jules not-so-distant past -- her estranged husband Carlos. They haven't seen each other in months, and Jules can't believe that Carlos wants to work on reconciliation while she's in the middle of her biggest job ever.

Things go from bad to worse for Jules when a storm hits and knocks out power. She treks through the snow to the marina for extra supplies, where she discovers a body resting on the ice. Now Jules has a retreat to cater, a husband intent on fixing their marriage, and a murder on her hands.

A delightful mystery where Jules travels to the slopes to cater a retreat only to end up in the middle of a baffling murder.