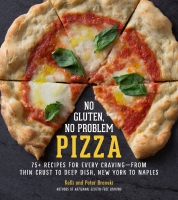 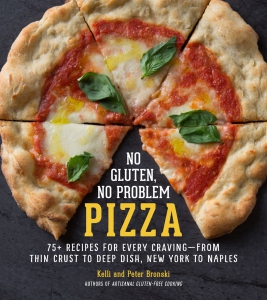 No Gluten, No Problem Pizza: 75 Recipes for Every Craving - from Thin Crust to Deep Dish, New York to Naples

Description
The Bronskis are back with the definitive guide to pizzas that are authentic and gluten-free (finally!) It’s no secret that gluten-free pizza often fails to deliver a springy, doughy crust equal to that of its wheat-based counterpart. But after Peter Bronski was diagnosed with celiac disease, he and his wife Kelli resolved never to settle for second-class fare. Now the authors of the category-leading Artisanal Gluten-Free Cooking put an end to lackluster pies and slices with No Gluten, No Problem Pizza! Here are tried-and-tested gluten-free recipes for more than sixty pizza creations made from fifteen kinds of dough - from American pies (à la New York, Detroit, and Chicago) to the Italian originals (Roman, Sicilian, Neapolitan). The novice and seasoned chef alike will find inventive toppings (pepperoni and sausage; Brussels sprouts and pancetta; pear, pecan, and blue cheese - you name it), exciting spins on classic recipes (Thai Chicken Pizza, anyone?), and all the flavour and texture you could want - with none of the gluten!
Previous Titles
Artisanal Gluten-free Cooking 9781615190508
Selling Points
From deep dish to thin crust, this is the definitive gluten-free guide to mouthwatering pizzeria-quality pizzas, flatbreads, calzones, and more!
« Back