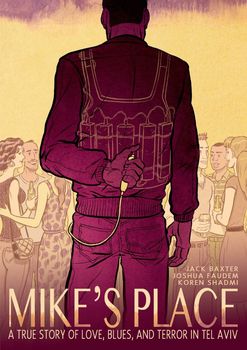 Mike's Place: A True Story of Love, Blues, and Terror in Tel Aviv

Mike's Place was one of the few spots in Tel Aviv where Jews, Christians, and Muslims could hang out peaceably, surrounded by the expats who filled the bar every night. It was a cosmopolitan haven from the conflict, a local gem that many pointed to as a hopeful sign that peace could come to the Middle East after all. In the spring of 2003, filmmakers Jack Baxter and Josh Faudem had just begun making a documentary about the bar.

And then the bar was destroyed in a suicide bombing that took three lives and wounded another fifty people—an attack that changed Jack and Josh's lives forever.

With art from Israeli cartoonist Koren Shadmi, Mike's Place is a gripping nonfiction accounting of the lives of a handful of people who came together in hope, then had to find their way together through despair.

A nonfiction graphic novel about the aftermath of a suicide bombing in Tel Aviv in 2003—from documentary film makers Jack Baxter and Josh Faudem.