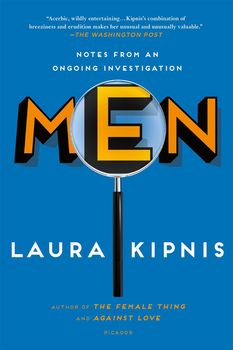 Men: Notes from an Ongoing Investigation

It's no secret that men often behave in confusing ways, but in recent years we've witnessed so many spectacular public displays of male excess - disgraced politicians, erotically desperate professors, fallen sports heroes. That we're left to wonder whether something has come unwired in the collective male psyche.

In the essays collected here, Kipnis revisits the archetypes of wayward masculinity that have captured her imagination over the years: the scumbag, the con man, the lothario, the obsessive, cheaters, gropers, self-deceivers, and many others.

Examining men who have figured in her own life alongside more notorious public examples, she draws out the masculine angst and emotional contradictions implicit in what looks like bad behavior or exercises of male privilege. Instead of the rebukes and condescension that typically greet such characters, Kipnis finds that they provoke in her complicated forms of identification and envy. Pushing past the usual clichés about the differences between the sexes, Kipnis mixes intellectual rigor and wit to give us a compelling survey of the affinities, jealousies, longings, and erotics that structure the male-female bond.

From the acclaimed author of Against Love, a witty and sharp-eyed examination of the badly behaved men who have been her lifelong fascination, on an off the page.