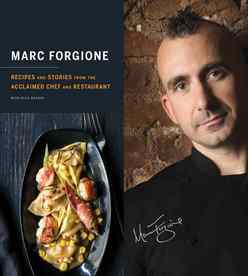 Marc Forgione: Recipes and Stories from the Acclaimed Chef and Restaurant

Chef Marc Forgione opened his eponymous New York City restaurant in 2008 to widespread acclaim, becoming the youngest American-born chef and owner to receive a Michelin star in consecutive years. Upon winning Season 3 of Food Network's The Next Iron Chef, Forgione joined the ranks of former and current stars and best-selling authors such as Mario Batali and Bobby Flay. He can now be seen competing as one of the stars of the beloved Iron Chef America. Forgione's first cookbook features gorgeous photos throughout and 170 recipes with restaurant signature favourites including Chili Lobster and Chicken Under a Brick. The cookbook features not only recipes but also stories of an unlikely journey to where Chef Forgione and the restaurant are now. Flavour comes first, but Forgione is like an artist in the way he presents food. His goal with the book is not to just present a collection of recipes but to challenge home cooks and aspiring chefs, helping them to elevate their skills in the kitchen.

The eagerly awaited first cookbook from one of Food Network's favourite competitors on the wildly popular Iron Chef America.