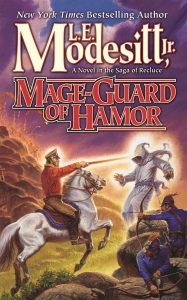 Description
Rahl was an apprentice scrivener in Land's End who found himself facing charges of misuse of order. Banished to Hamor, Rahl's powers increased along with the amount of trouble he could get into. Now a full mage, Rahl's powers continue to make him a danger to himself and others. He must learn self-control even as he is transferred to the army charged with putting down a rebellion against the Emperor...in a conflict where nothing is as it seems.
Previous Titles
HERITAGE OF CYADOR 9780765381903 and CYADOR'S HEIRS 9780765374783,
Selling Points
A novel in the bestselling epic fantasy series the Saga of Recluce.
« Back