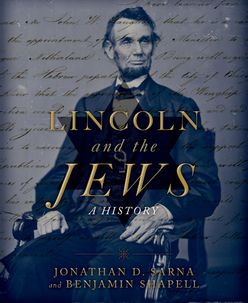 Lincoln and the Jews: A History

By the time his life ended, Lincoln had been involved with over one hundred Jews, stood against many of his anti-Semitic generals even as he needed them to win the war, and become an advocate for Jewish equality and acceptance. In a country rampant with prejudice, where Jews comprised less than one-half of one percent of the population, the story of Lincoln and the Jews is astonishing.

LINCOLN AND THE JEWS will include 150 black & white and full colour original letters, documents, photographs, lithographs, ephemera, and artefacts throughout. The scanner, owned by The Shapell Foundation, used to preserve the documents electronically is extremely unique. There are only four scanners of this kind in the world—one in NASA, one at the Pentagon, one in Germany, and one in Tel Aviv. The scanner is so large, it can scan a whole person—and indeed it has been used to do so!

Co-authored by highly respected professor Jonathan Sarna and Benjamin Shapell of The Shapell Foundation, LINCOLN AND THE JEWS will detail the untold manifold relationships Lincoln had with the Jewish community in Civil War era America. A fascinating never-before-told story for fans of Lincoln, American history, and Judaica.

Gorgeous, lavishly illustrated Passover gift book that presents never-before-seen documents proving Lincoln's strong relationship with Jews in America. LINCOLN AND THE JEWS focuses on the significant, but previously unknown, relationships and interactions between Abraham Lincoln, the most studied and revered President in American history, and his Jewish friends and associates.