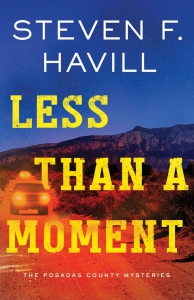 Less Than a Moment

Description
A Posadas County Sheriff's Department Dispatcher sticks a Post-It note on an incident report. What he meant to write was, 'Not for news,' hoping that the newspaper reporter who drops into the Sheriff's Office each morning would ignore the report. But what he unintentionally wrote was, 'Note for news,' and so the arrest of Quentin Torrez, nephew of Posadas Sheriff Robert Torrez, goes public. And Quentin, who has applied for a job with the NightZone excursion narrow gauge railroad, loses any chance at employment. Shortly thereafter, a night-time drive-by shooting riddles the front of the newspaper office--and despite the late hour, two of the newspaper employees are inside, and both are wounded. Are the incidents connected? Sheriff Torrez and Undersheriff Estelle Reyes-Guzman will need all the help they can get to solve this puzzling case.
Selling Points
The smallest errors lead to big consequences in this heart-stopping mystery
« Back