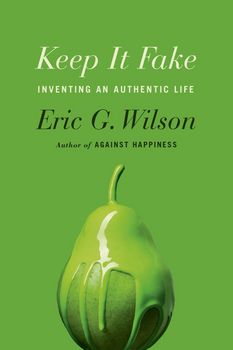 Shoot straight from the hip. Tell it like it is. Keep it real.

We love these commands, especially in America, because they invoke what we love to believe: that there is an authentic self to which we can be true. But while we mock Tricky Dick and Slick Willie, we are inventing identities on Facebook, paying thousands for plastic surgeries, tuning into news that simply verifies our opinions. This is frontier forthrightness gone dreamy: reality bites, after all, and faith-based initiatives trump reality-based ones, and becoming disillusioned is a downer.

In his new book, part memoir, part cultural analysis, Keep It Fake: Inventing an Authentic Life, Eric G. Wilson clarifies this confusion. He draws on neuroscience, psychology, sociology, philosophy, art, film, literature, and his own life to explore the possibility that there’s no such thing as unwavering reality. Whether our left brains are shaping the raw data of our right into fabulous stories, or we are so saturated by society’s conventions that we’re always acting out prefab scripts, we can’t help but be phony.

Are some fakes more real than others? Are certain lies true? In lively prose—honest, provocative, erudite, witty, wide-ranging (as likely to riff on Bill Murray as to contemplate Plato)—Keep It Fake answers these questions, uncovering bracing truths about what it means to be human and helping us turn our necessary lying into artful living.