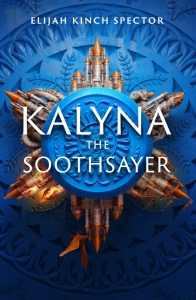 Description
Kalyna’s family has had the Gift for generations: the ability to see and predict the future. For decades, they have traveled around the four connected kingdoms of the Tetrarchia—one country with four monarchs—selling their services as soothsayers. The Gift is their calling and what defines them. Every child of their family has the Gift. Except Kalyna. Born without the Gift, for years, she’s supported her father—who is losing sight of reality under the weight of his confused visions of the future—and her cruel grandmother on the strength of her wits, using informants and trickery to fake prophecies and scrounge a living. But it’s getting harder every year. And poverty turns to danger when, on the strength of her reputation, Kalyna is “hired” (kidnapped, she would call it) by Lenz, the spymaster to the prince of Rotfelsen. Lenz wants Kalyna to use her talent for prophecy to uncover threats against Rotfelsen’s king, and he’s willing to hold her family hostage against her good behavior. But Rotfelsenisch politics are devious; the King’s enemies abound; and Kalyna’s skills for investigation and deception are tested to the limit. Worse, the conspiracy she begins to uncover points to a threat not only to the King of Rotfelsen but to all four monarchs of the Tetrarchia, when they meet for their annual governing “Council of Barbarians.” A Council that happens to fall at precisely the same time that Kalyna’s father has prophesied the catastrophic downfall of the Tetrarchia. Kalyna is determined to protect her family (even Grandmother!), and her newfound friends—and to save the Tetrarchia too. But as she is drawn deeper into palace intrigue, she’s not sure if her manipulations are helping prevent the Tetrarchia’s destruction—or if her lies will bring it about.
Selling Points
A woman born without the Gift of future sight that has been her family’s legacy for generations must pretend to tell fortunes for a prince who holds her family hostage—and navigate the potential collapse of the kingdom.
« Back