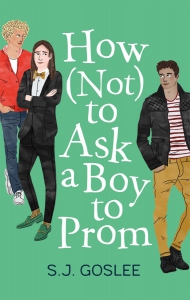 How Not to Ask a Boy to Prom

Description
When Nolan's sister tries to get him a boyfriend, he fake-dates a bad boy instead in this modern gender-bent young adult rom com. Nolan Grant is sixteen, gay, and very, very single. He's never had a boyfriend, or even been kissed. It's not like Penn Valley is brimming with prospects. Nolan plans to ride out the rest of his junior year drawing narwhals, working at the greenhouse, and avoiding anything that involves an ounce of school spirit. Unfortunately for him, his adoptive big sister has other ideas. Ideas that involve too-tight pants, a bag full of purple glitter, and worst of all: a ticket to Prom.
Selling Points
S. J. Goslee has written a hilarious gender-bent rom-com perfect for anyone who loved To All The Boys I've Loved Before or Simon vs. the Homo Sapiens Agenda.
« Back