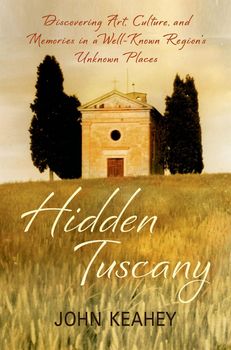 Keahey interviews sculptors and their artigiani, craftsmen and women who toil in the marble studios, eating their lunch in workers' clubs and cafes. From beach locales such as Viareggio, to Livorno (which has Venetian-style canals), modern Orbetello and the seven islands of the Tuscan Archipelago, Keahey reveals beaches rich in European visitors and magnificent medieval villages that rarely see outsiders. The larger, better-known Tuscan coastal city Pisa can even surprise a curious visitor with places of solitude.

Keahey's previous books have always received widespread and complimentary review coverage—garnering praise for the depth of his research and his comprehensive analysis. Travellers instantly flock to books about Tuscany, and this one promotes towns and villages that are often missed by tourists, letting readers in on these "secret" destinations. For armchair travellers or holiday seekers, Hidden Tuscany puts a very human face on the region in Keahey's discussion of food, history and language. And the result is mesmerizing.

A new travel narrative that focuses on Tuscany’s little-known western coast, showcasing a region off the beaten track. Tuscany's Wild West vividly displays the coastal areas of Tuscany, a territory often overlooked by visitors eager to see Chianti, Florence or Siena. Veteran journalist and Italophile John Keahey points out the keen distinctions that the western cities maintain: in food, lifestyle, and the way its artists are paving new directions in art that differ mightily from the Renaissance-rich interior.