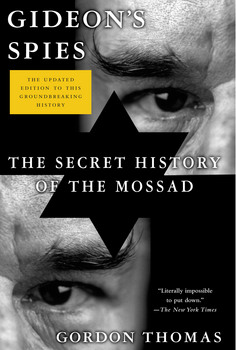 Gideon's Spies: The Secret History of the Mossad

In the secret world of spies and covert operations, no other intelligence service continues to be as surrounded by myth and mystery as the Mossad. Gideon’s Spies reveals that all too often the truth exceeds all the fantasies about the Mossad.

Revised and updated for 2012, this new edition includes:

• A look inside the modern Mossad training school • The departure of long-serving Mossad chief Meir Dagan, replaced by Tamir Pardo

• The unresolved murder of a Mossad spy in London

GORDON THOMAS is a bestselling author of forty books published worldwide. He has firmly established himself as a leading expert on the often sinister, but always compelling world of secret intelligence.

A revised and updated edition of this bestselling, classic history of the Mossad