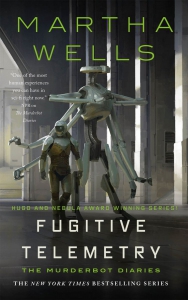 Description
Having captured the hearts of readers across the globe (Annalee Newitz says it's 'one of the most humane portraits of a nonhuman I've ever read') Murderbot has also established Martha Wells as one of the great SF writers of today. No, I didn't kill the dead human. If I had, I wouldn't dump the body in the station mall. When Murderbot discovers a dead body on Preservation Station, it knows it is going to have to assist station security to determine who the body is (was), how they were killed (that should be relatively straightforward, at least), and why (because apparently that matters to a lot of people - who knew?) Yes, the unthinkable is about to happen: Murderbot must voluntarily speak to humans! Again!
Previous Titles
All Systems Red 9780765397539, Rogue Protocol 9781250191786, Exit Strategy 9781250191854, Network Effect 9781250229861
Selling Points
The New York Times bestselling security droid with a heart (though it wouldn't admit it!) is back!
« Back