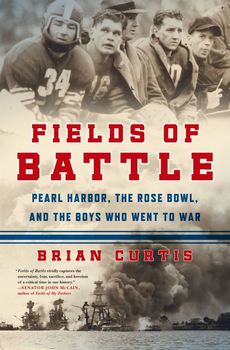 Fields of Battle: Pearl Harbor, the Rose Bowl, and the Boys Who Went to War

In the wake of the bombing of Pearl Harbor, the 1942 Rose Bowl was moved from Pasadena to Duke University out of fear of further Japanese attacks on the West Coast. Shortly after this unforgettable game, many of the players and coaches entered the military and went on to serve around the world in famous battlegrounds, from Iwo Jima and Okinawa to Normandy and the Battle of the Bulge, where fate and destiny would bring them back together on faraway battlefields, fighting on the same team.

For fans of Unbroken and Boys in the Boat, Fields of Battle sheds light on a little known slice of American history where WWII and football intersect. Author and sports journalist Brian Curtis captures in gripping detail an intimate account of the teamwork, grit, and determination that took place on both the football and battle fields.

A riveting and emotional tale of the boys who played in the 1942 Rose Bowl and then served on the WWII battlefields - a story of football, wartime, and boys becoming men.

"My boys were going in and I felt like we should stay together as a team. We were just participating in a different battle."  - Wallace Wade, head coach of the 1942 Duke football team