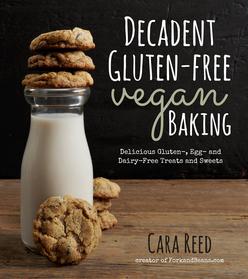 Baking delicious, one-of-a-kind desserts is one thing, but when those desserts put the exclamation point on healthy by being gluten-free AND vegan, now that’s something everybody can enjoy. And Cara Reed, creator of ForkandBeans.com, is sharing over 100 amazing and easy gluten-free vegan recipes, using tasty substitutions such as almond milk, soy butter, coconut oil and nut-based cream, so your treats can be the star of the show in any setting.

Cara Reed’s popular site, Fork and Beans, gets over 5,000 hits a day and her recipes have been featured in VegNews magazine and on KrisCarr.com and Enjoylifefoods.com. Her blog has also been voted one of the Top 50 Vegan Blogs.

Decadent Gluten-Free Vegan Baking allows you to bake French macaroons, cinnamon coffee cake, Foccacia bread, Pop Tarts, Doughnuts and Cheez-Its to name a few. So whether you’re gluten-free, vegan or just looking to try something a little more nutritious, this book has it all.

Creative techniques for baking eye-catching treats that are as healthy as they are tasty—vegan and gluten-free.