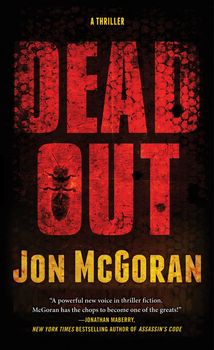 A trip to an island off the New England coast might be just what is needed to jumpstart Detective Doyle Carrick and Nola Watkins' stalled relationship. But a mysterious plague is killing the island's bees. Stoma Corporation, a giant biotech company, moves in with genetically modified super bees that supposedly are the answer to the world's bee crisis. As tension grows between protestors and a private army of thugs, Doyle realizes that bees aren't the only thing being modified. Things spin violently out of control on the tiny island, and when Doyle closes in on what Stoma Corporation is really up to he must race to stop them before their plot succeeds and spreads to the mainland and the world.

A mysterious plague is killing an island's bees. Deadout is the thrilling follow-up to McGoran's highly acclaimed novel, Drift