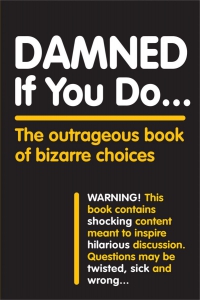 Description
Previously published as Would You Rather . . .?, with 356,000 copies in print, Damned If You Do . . . is an addictive game in a book that challenges readers to ask—and attempt to answer—more than 400 questions that range from the heinous to the nauseating to the downright disturbing. Each is a field-tested conversation starter guaranteed to provoke ridiculous fun, break the ice at any party, and, like some kind of sick Rorschach test, open a unique window into the minds of friends and family. Some questions delight in their own grossness: Would you rather . . . Eat three earthworms–OR–wear a necklace made of them on your wedding day? Be trapped in an elevator with wet dogs–OR–three fat men with bad breath? Some force you to reveal values: Would you rather . . . Age only from the neck up–OR–age only from the neck down? Be stupid and rich–OR–smart and poor? Some create that squirming sensation: Would you rather . . . Get a bad case of poison ivy way up inside your nose–OR–inside your inner ear? And some are just deliciously absurd. Each question also features related, often off-the-wall information, from quotes to dumb jokes to delightfully odd trivia (326-pound President William Howard Taft once got stuck in the White House bathroom).
Selling Points
400 outrageously funny and shockingly bizarre 'this or that' questions for adults, featuring a good dose of gross, a little bit of edge, and a lot of hilarity. What would you choose, when each choice is more nauseating or heinous than the other? Ask yourself, a friend, or a group!
« Back