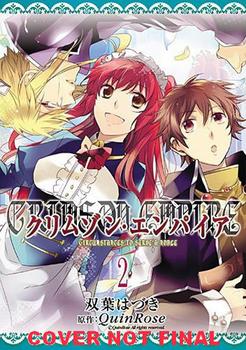 Featuring a strong heroine who is a deadly assassin yet awkward when dealing with the many male suitors who surround her, Crimson Empire: Circumstances to Serve a Noble combines romance, fantasy, and swashbuckling adventure. Each volume contains impressive shoujo-style artwork and colour pinups.

From the time she was sold into servitude as a young girl and told by a handsome demonic figure that she had a destiny to fulfill, Sheila’s childhood was anything but easy. After joining an assassins’ guild to undergo rigorous training, Sheila is later taken in by the dashing Prince Edvard to serve as both his housemaid and bodyguard.

Previous Titles
Crimson Empire:Circumstances to Serve a Noble vol.1 9781937867232
Author
<p>QuinRose is a Japanese game developer who created the Alice franchise of video games, which spun off into novels, manga, and an anime feature film.""<p>Hazuki Futaba is a Japanese manga artist and light novel illustrator best known for his work on "Crimson Empire: Circumstances to Serve a Noble"
Selling Points