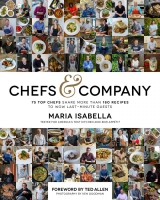 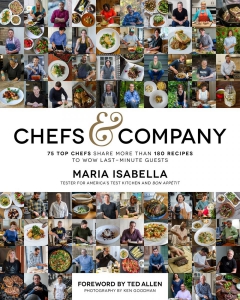 Description
What would an award-winning chef cook if they were entertaining at their own home? Seventy-five award-winning chefs share their favourite go-tos for at home entertaining. This book will include recipes from celebrity chefs such as Hugh Acheson, Ming Tsai, Lidia Bastianich and Rick Bayless. It will also include a foreword by Ted Allen, Emmy Award winner and host of Chopped. Throw an unforgettable dinner party with dishes like Seared Loin Lamb Chops with Aleppo, Pork Tenderloin with Roasted Tomatillos, Peppercorn Duck with Cranberry Chutney and Eight Treasure Rice, Goat Cheese Fritters with Green Apples and Pomegranate and Cast Iron Seared Sea Scallops with Pea Shoots and Kale Salad. With Chefs & Company, you can create meals for every occasion and taste. Whether you’re in the mood for French, Italian, Mediterranean, Mexican, Middle Eastern, Cajun, Chinese or Southern, you’ll never be without a recipe to inspire you.
Selling Points
This never-before-assembled group of 75 A-list chefs share their favourite recipes that you can make in less than an hour.
« Back