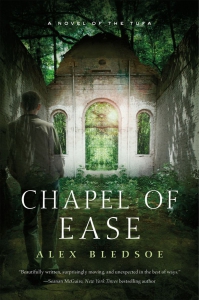 Description
Many songs have been told about the Good Folk of Celtic mythology, but Alex Bledsoe weaves fairy tales unlike any other: all set in the mythic and southern gothic-tinged foothills of Appalachia. When Matt Johansson, a gay actor from New York, auditions for the off-Broadway musical, Chapel of Ease, he knows it is the opportunity of a lifetime - especially after he befriends the show's composer, Ray Parrish. Misfortune strikes, however, when Ray mysteriously dies just as the show reaches its peak buzz during previews. Taking Ray's ashes home to Tennessee, Matt is determined to find closure and figure out the musical's core mystery: what lies under the floor of the chapel of ease? Among Ray's people, the enigmatic Tufa clan, Matt encounters new love and unexpected surprises, both magical and mundane.
Previous Titles
Chapel of Ease 9780765376565, Wisp of a Thing 9780765376930, Long Black Curl 9780765376541 and The Fairies of Sadieville 9780765383365
Selling Points
An NYC actor investigates the secret lives of the fae folk in Bledsoe's fantasy series that Seanan McGuire calls 'surprisingly moving and unexpected in the best of ways.'
« Back