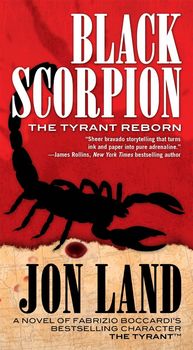 Five years have passed since Michael Tiranno saved the city of Las Vegas from a terrorist attack. With the emergence of an all-powerful human trafficking organisation called Black Scorpion, he must leap into action once more.

Black Scorpion is exploiting and ravaging innocents all across the globe. America and Michael are its newest targets. Scarlett Swan, an archaeologist searching for the origin of the ancient relic that both defines and empowers Michael, is taken hostage by the organisation. To save the country, and the woman he loves, Michael must embrace his true destiny and become the Tyrant reborn, a dark knight who can triumph over ultimate evil and stop Black Scorpion from plunging Las Vegas into chaos and anarchy and undermining the entire United States.

The Seven Sins' Michael "The Tyrant" Tiranno returns to take on a human trafficking cabal in this pulse pounding action-thriller.