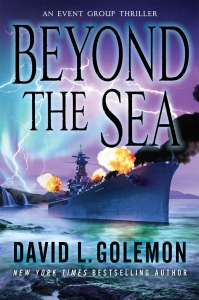 Description
American Los Angeles class submarine U.S.S. Houston is tracking a surface target that is not listed as part of the Russian navy’s response to the NATO maneuvers. It’s a Soviet-era battle cruiser. With the world’s most powerful navies going toe-to-toe in the North Atlantic over who has rights to the salvage, the President calls upon the one organization that has a chance to figure out why this ship is in this time, in this place—Department 5656, also known as the Event Group. What they find will answer one of the great mysteries of World War II. In the midst of their warfare in the tossing seas, the Group is sent into a realm of unimaginable terror—an alternate world of water, ice, and death.
Previous Titles
9781250103079 Beyond the Sea (Hardback), 9781250057662 The Traveler, 9781250103109 In the Still of the Night, 9781250013026 Overlord
Selling Points
The Event Group has a new mission when relics of the Philadelphia Experiment surface
« Back