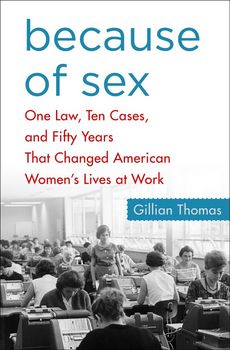 Because of Sex: One Law, Ten Cases, and Fifty Years That Changed American Women's Lives at Work

The 1964 Civil Rights Act is best known as a monumental achievement of the civil rights movement, but it also revolutionised the lives of American women. Title VII of the law made it illegal to discriminate "because of sex." But Congress did not specify how that would affect a "Mad Men" world where women played mainly supporting roles. The Supreme Court had to endow the phrase with meaning, and its decisions dramatically changed how the nation sees working women - women like Ida Phillips, denied an assembly line job because having small children deemed her unreliable; or Kim Rawlinson, who fought to be a prison guard because she believed that being 5'3" and 115 pounds didn't mean she couldn't do a "man's job"; or Ann Hopkins, refused a partnership at Price Waterhouse because the men in charge thought she needed "a course at charm school."

But even if women are Supreme Court justices and presidential contenders today, there is a long way to go. Peggy Young, whose case was heard by the Supreme Court in December 2014, was forced onto unpaid leave while pregnant because UPS refused to accommodate a temporary lifting restriction imposed by her doctor. To understand this and other remaining obstacles to women's full equality on the job - from "mummy tracking" to unequal pay to a sex-segregated workforce - we need to know how we got here. Because Of Sex tells that story, and gives an unsung group of heroines their due.

A compelling look at how the Supreme Court has defined women's rights on the job, the brave women who brought the cases to court, and all the work that's yet to be done in the name of equality.